The conveyer belts of Dubai

It was my first time walking on a conveyer belt. Anshuman warned me that I should stop just before getting off otherwise I would get thrown off like he did when he got here. We waited for another conveyer belt to spew out our baggage and excess baggage. I got my retina scanned at the airport.
Went to the Supermarket to buy sabzi and there was a cute little conveyer belt there too right next to the cash counter. Then ofcourse another one to take the trolley down from the first floor right upto the taxi cab. I don't know what happened to lifting and walking although I am not complaining.
I went to IKEA and that was a pleasure beyond words. Their furniture is just beautiful. My darling husband looked almost scared at the expression of happiness on my face. I realised that the mattress of our new bed costs more than the bed itself. I got the chest of drawers I always wanted. I will transfer my squashed clothes from the suitcase into the drawers. The storage area at IKEA was so huge that it reminded me of the perspective drawings I never managed to make at NID. I felt like a tiny little person in a good way. They just came and assembled everything and it all looks great.
I tried my hand at cooking after a loong time. The dal chawal was ok but I think I burnt the sabzi a little bit. Anshuman liked it anyway. He is my husband after all he has to like it! Will try something else today.
Everything is new. I'm taking it one day at a time. Ever since I got here I feel like becoming an international spy with my new passport, learning a few languages, losing some weight and going to all sorts of new places with conveyer belts... or may be I could be an interpreter.
Posted by Parul Gahlot at 4:25 PM 5 comments:

I took the flight to Bombay day before yesterday. The flight was rocky and the food was bad. The Subway sandwich sucked. I don't know why so many people eat the dry subway sandwich. My co passenger was a young boy fresh out of school called Vikram Singh. He noticed me looking inside the sandwich and told me to ' just have it!'. I still couldn't finish it.

I'm slightly scared of flying. The moment the plane picks up speed on the runway I get a little nervous. I had little time to be afraid this time as the boy Vikram kept complaing about how hot it was. He is taking a break after studies and training to be a pilot. His father is rich and therefore can afford to let him be. I took the advice of another pilot who told me to relax my body and distract my self with a magazine. I followed to the letter, read and wrote in my little notebook. The flight landed on time. I made it.

Standing in line for the luggage I looked out for Anshuman. I remembered my parents in Delhi. I thought that I would cry at the airport but I didn't. When I used to go to Ahmedabad to study I would always cry a little bit in the train. This time strangely enough there were only smiles.

I found Anshuman at the arrival gate. I met him after 6 months but hugging him felt like home. Everything felt fine.

The rude traffic jam told me in the voices of horns, engines, exhaust pipes, fumes I was temporarily home from another home and about to go to another home in another country that I have never been to. Bombay UAE next.
Posted by Parul Gahlot at 4:21 PM 2 comments: 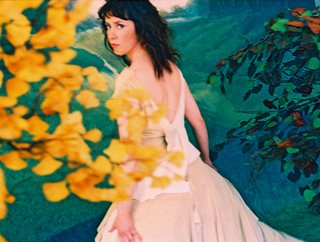 This is Suzanne Vega. My dearest wish in life is to hear her singing live. Sometimes I feel she has already said pretty much all I want to say and obviously better...
This is what I'm listening to today...