So I spent three weeks in India. Sharjah-Bombay-Goa-Bombay-Delhi-Bombay-Sharjah I flew and flew and flew and loved every minute of it. I can't even imagine that there was a time that I was a little bit afraid of flying. I would get nervous everytime the plane picked up speed and the engines made that nerve racking sound. Now I peacefully read my book without even bothering to look up.

I have asked many people and the vote is the same. When you're at the airport travelling alone you begin looking rather carefully at the people before and after you in the queue for the boarding card. You know that one of these characters is going to be your flight partner for the next however many hours. I personally have a mental image of the kind of person I want to travel with. It's unimportant what this image is the more pertinent thing is that I keep modifying this image to suit the people around me. Then I almost always pick one person who seems to be ideal to spend an hour or two with- with or without conversation thrown in. Now this person has never actually sat with me. Try it. Pick one person at the airport you want to sit with and you'll never be seated with them. In front of them, behind them, at the other end of them but never ever with them.

That's why I like to travel with Anshuman, that way there is no disappointment. That's marriage for you. Someone to sit next to on a plane. Speaking of marriage. I celebrated my 7th anniversary sitting behind my husband on a kinetic honda in Goa driving aimlessly on the sloping roads of Goa. We ended up in a really small town and kept circling it looking for a place to eat. We finally found a restaurant in a hotel. I think no one lived or ate there. We had a nice lunch and I bought pearl ear rings from a hotel shop which was like a small garage. Then we went up a small hill where the camera battery died. We had 5 chargers with us at the hotel. Oh please don't ask me why. I like SLR cameras. Always have. Even though it's apain to give them for developing and stuff. I still like them. Their batteries last much much longer and will not give up just when you would like to imprison a moment. So we came to a clearing and i wandered down a path to find a couple huddled in bushes. Embarrassed I turned around and giggled to myself.


In the night we walked for a long time and went to a restaurant Anshuman had seen when were coming back from our bus tour the day before. I was tired when we finally sat down for dinner. The dinner was lovely and then we walked back again to the hotel. I was exhausted from celebrating our anniversary and slept right away as Anshuman fiddled with the laptop and his wi fi card. Anshuman's holidays work if you know what I mean. That's marriage for you. You take working holidays and they actually work. OK I'm exaggerating.

We spent a chilled out day at Anjuna beach. I drank lassi and juice and Anshuman beer as we watched a drunk woman sprawled on the wet sand like a beached whale. Anshuman thought she looked like a Ram G Verma heroine striking sexy poses. Everyone watched her benevolently with understanding smiles till her friends took her away with a firm - ENOUGH!! I shopped at the flea market where everyone speaks English and I was mistaken for a Brazilian though I think it was just so I would be flattered at being mistaken for a foreigner and in my good mood would pick up something. The usual firangs were there in their swim suits and open shirts and it played jazz in the beachside cafe. I hate Jazz. I don't care if I'm considered musically illiterate. I just hate jazz.

I went into the water only once this time. The sand underneath was so uneven that I felt like I was drowning in chest deep water. Anshuman had to hold both my hands and guided me ou of the water. I must say I was petrified when my foot sunk in about a foot and my husband was much amused and entertained. Needless to say I don't know how to swim. Although I love putting lots and lots of sun block. In my case it seems to work as a fairness cream and after the evening bath I glow like a light bulb all set to lose money in the hotel casino. Their cashier smiled all the time, like he was really amused. I don't know if it was all the money he had or he had funny toes or his mom told him a joke before he left home each day, I don't know why he just looked down and smiled. All the bloody time. I finally asked him why he smiled all the time and...you guessed it- He just smiled.

So we went to this restaurant where I had my first Fish Curry rice and the waiter gave me a rose as we got up to leave and somehow I didn't mind. It was rather nice. Anshuman picked up a small shell on the beach and gave it to me saying- ' with this I thee wed ' He likes picking up shells but this one is special because it is my anniversary gift. I will always keep it. Smush smush mush mush.

Moving on. We came back to Bombay. I didn't do much. In Bombay you need too much motivation and stamina to do stuff especially if you live in Borivli. So I did very little. Next stop Delhi. I went to Noida everyday to the malls. Shopped. Ate fantastic food only my Mother can make. Spent time with my sister and then Bombay. Then back to Sharjah.

Recently I went to a club in Dubai and I made some wonderful notes on the way people dance but mostly I have forgotten. I just remember that I can never spend the whole night just dancing away like I did many times eons ago. I still love to dance but I take frequent breaks. I am a growing woman in need of regular exercise and a healthy diet. MAN that so sounds like someone else!!
Posted by Parul Gahlot at 5:11 PM 10 comments: 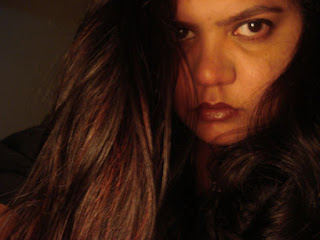 I want to write so much...about my holiday...about the way people dance and so much more...instead I am posting a picture of myself. I have to get off the computer and make chana. Later in the evening if I am not going out I promise I will write. Till then bear with the picture with the weird expression.
for those of you who don't know Hamam zait it means bath oil. So you take a bath put thick cream in your hair and massage then put a hot towel over your head then wash after ten minutes. The result is truly amazing as you can see in the picture above. I love blowing my own trumpet and advocating hamam zait to all.
Posted by Parul Gahlot at 11:18 AM No comments: 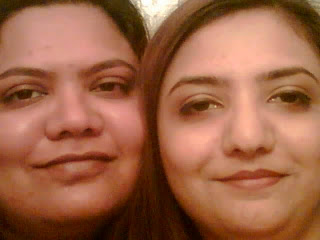 My younger sister Priyanka. I did her make up like numerous times before only this time after a really long time.