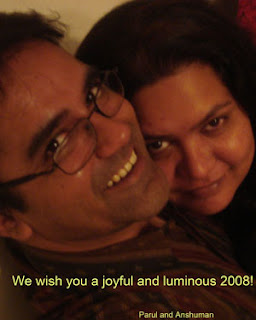 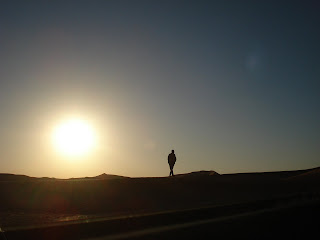 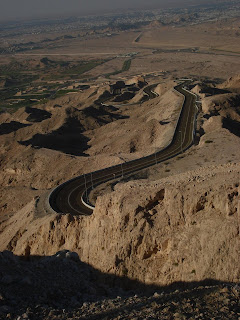 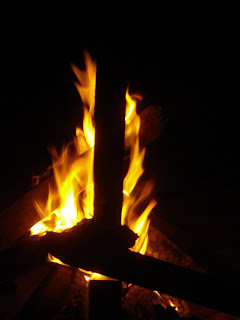 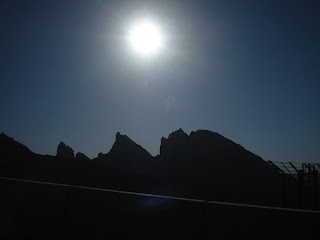 So I went for my first camping trip with Anshuman and eight other people. We wanted to take chole poori from Uttam restaurant but he doesn't make it in the mornings so we settled for aaloo parathas. In the morning Anshuman couldn't get a taxi to pick up the parathas so we went ahead with marinated chicken tikkas and boiled eggs. The good thing about camping is that everyone gets food more than they need so you can actually feed 5 more people than the ones present.
Ananth, Arti, CK , Anshuman and I were in Elsa ( ananth has lovingly named his car ) following Dipen in his Pajero. We drove and drove and reached a place in Al Ain where we were supposed to go through a check point which has recently begun asking for passport. So now we didn't know which route to take so we parked the cars and quickly ate some kokis ( paratha like things made with onions and something else i didn't figure out) standing on the roadside.
Then we reached some hot springs. There were a lot of people picnicking and some had pitched their tents in the park. I dipped my feet in the water which was pretty hot. Later a kid came and peed at the source of the spring and then turned around to walk away witha smile. Some women sitting a little further up took out their feet instantly. No one said anything because he was barely 4 years old and the parents clearly didn't care.
I went to a restaurant where no one was there. That's the weird thing about Al Ain. It's a very beautiful place with flowers lining the roads and big houses with big cars but there were no people. It felt like most people left and the rest were in their cars on their way out. There is a roundabout ever so often with pagoda like structure, giraffes, antelopes, deer to a huge carafe and glass.
We drove on and finally got to the desert. Pitched up tents. Took out the food. Lit the fire. Anshuman roasted the chicken. Ananth roasted the rann which took one and a half hour to cook and then fell in to the sand to everyone's horror. Everyone drank and sat around the fire. I learnt during the conversation that in Fiji there is a coup every four years and the tourism industry suffers for that year. Fiji people make extremely expensive exquisite coconut furniture. Someday.
Slept curled up in the tent and woke up to find that half the people had left to get chai. We were very close to the city. They came back with a tea pot and tea got made. Thank God. Then came packing up which is the most stressful part. Garbage needs to be collected. Tea pot had to be scrubbed clean to be returned. Everything had to go back in bags and reach their respective car boots.( I'm getting tired writing about it) The tents had to come down. Our tent had to be folded thrice before it finally fit into it's bag. Phew!
So all the cars left. We came to Dubai for lunch at Kalavara. Then went to Um al qwain to pick up Ninna and finally reached home. Had chinese food. I uploaded the pictures on facebook. FINALLY slept.
That's all folks! I gotta make tea as anshuman listens to an arabic song on tv as the video shows bikini clad bimbettes.