So much I've said

So it's been a really hectic weekend of fun. I think if I have too much fun, I get tired and want to crash on the sofa with a good book and Ninna at my feet chewing her stuffed rat.

These days she has taken to standing on her hind legs on the sofa and stare out of the window. For some time I thought she must like the view from the 20th floor but when she began to constantly bark, which she rarely does otherwise I figured that she could see her reflection in the glass and was most pissed off by it.

Then she started looking out of the window during the day. This time I was sure she just needs time to think about whether she really likes the Royal canine dog food we feed her or the earlier more liquidy stuff . But no that wasn't it. She was chewing dead fallen leaves from Hariya sunning himself on the window sill -obviously a plant that I have lovingly named but whose pedigree I have no clue of. He lives in a giant tea cup and saucer that were a gift from Arti. I think she gave them to me because everytime I went to her place I said " I just love it. It's so cute." She had got it as a gift which she generously passed along to me. Arti is cute that way. She actually went all over Vienna looking for a deck of Tarot cards for me and finally got the lovely Osho deck.

Anshuman and I went to see the Roger Waters show. I looked at the picture on the heavily priced tickets and thought that the guy from Pink Floyd had really changed. In the car on the way to the show I got to know that the guy I was thinking of was David Gilmore- the lead singer. No wonder they didn't look alike. Roger Waters looks so much like Richard Gere it's not funny. Actually Gere will look like Waters when he grows really old. He already is pretty old.

I know only a few sngs of Pink Floyd. I think most people around us didn't know the lyrics including me so we just did the OOOOOAAA and let Waters sing the rest. Anshuman ofcourse knew quite a few songs but then he is Anshuman. He slept with Floyd and woke up with Dylan. ( Anshuman I mean this comment in the best manner possible. I love you)

I bought a glittering shiny ball on a string and swung it in a circle and when I got tired of it put it around my neck. It glitters like a bulb and to make it stop you squeeze it. It is now hanging as part of the interior decoration of Ninna's crate. She has no interest in it whatsoever. I think it looks cute and would like it if Ninna played with it at least once but she is just not bothered about my thoughts on this subject or any others for that matter.

Comfortably numb is the only song whose lyrics I know so I sang along lit up a lighter and waved it something I always wanted to do at a concert. I could never do it in Bombay because the assholes take away your lighter and cigarettes. Here the assholes took away my water bottle and packets of food. Anshuman got a bottle of water in his pocket anyway. He knows how I can't live without water.

I totally fell in love with the guitarist whose name I promised I wouldn't forget. Not surprisingly I have forgotten. I sent him a flying kiss across the lake of people and am sure that he got it and am convinced that he was playing just for me, just like everytime Waters sang " Vera" I swear my name changed in that second. All through this I had a red eye. My right eye had gone blood red.

I woke up in the afternoon the next day with my right eye crying like the guitarist from yesterday died an untimely death. I kept sniffing and collecting soggy tissues as Ninna loves tissues. She tears them up and leaves them lying around for me to pick up. It's a privilege I could live without.

Anshuman had to go to an awards function in the night so I wasn't looking forward to a night of sniffing on my own. I went to the doctor who sent me to the eye doctor who told me I had conjunctivitis. I asked her if my husband could get it from me ('Poor thing' I said) she laughed and said you're the first person worried about your husband, normally people worry about kids.

I asked her-" Is my Dog going to get it?" She didn't laugh this time. I think she thought I was just being an ass now. I really wanted to know. She didn't know anyway. She called me today to check on my progress for my file and I didn't recognise her. She reminded me I had come crying to her just the day before. How embarassed can you get?

I put drops in my eyes and settled on the sofa with tissues and Ninna. Anshuman got ready looking handsome in a new suit and red tie as I lay crying in one eye.

He asked me if I thought he would win. I didn't want to jinx the whle thing so I just assured him I would pray for him. I put a tika on his forehead with mock blood from a mock cut on my real thumb before he left and said- " Vijayi Bhava!" Jhappi pappi later he left.

He won a Gold and a Silver Gulf Marketing Review Awards. I was thrilled and even though it was late I called Anna and Papa( Anshuman's parents) and gave them the happy news.

I'm so proud. I only wish he would win again and this time he would give a speech which would mainly consist of how wonderful supportive, loving, gorgeous and more I am. And ofcourse I would be in the audience beaming proudly wih the camera capturing my most enigmatic smile. Seriously I'm really proud. Way to go!
Posted by Parul Gahlot at 9:07 PM 6 comments: 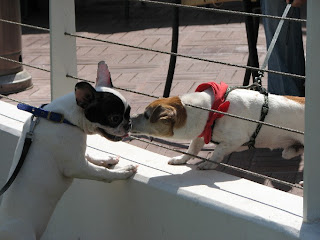 Ninna and the Romeo with the red scarf greet each other. This is the cutest picture ever. So we went to the Dog show in Dubai. It was great fun. Dgs of all shapes and sizes turned up with their owners. More photos later.
Posted by Parul Gahlot at 4:07 PM 1 comment: 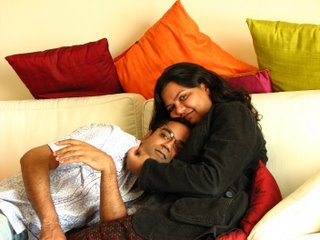 At Ananth's house
on the white sofa
smothering husband
wonderfully happy
Posted by Parul Gahlot at 2:49 PM No comments:

So I made a painting on canvas with acrylic colors. I just loved doing it. It turned out to be nothing like I had imagined it to be. Will post a foto soon.
Anshuman wrote an excellent story called 'The Black Label Man' Please read it on www.boybillionaire.blogspot.com
Posted by Parul Gahlot at 10:36 AM 2 comments: