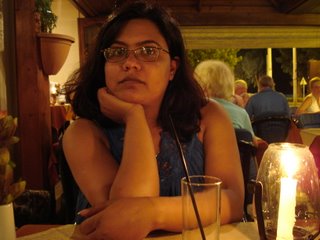 I had the best fish cutlet today. Anshuman made them in the afternoon and I ate them with great relish and speed tucked between two slices of bread, the cutlet I mean not me. I also look much like a cutlet these days and the above picture is testament to that. Anyway back to Anshuman's cutlets, I mean fish cutlets cooked by Anshuman. I liked them so much I went back and got more fish in the evening and now I have pretty much bulldozed him into making them again. The darling that he is, he's making them.
Unlike me Anshuman likes to cook. Most of the time his experiments turn out well. I'm lucky. He takes criticism very well too and I can be honest about the masala and other stuff. I think his father has passed on his cooking skills to him. He also cooks exceptionally well.
It's strange that when I started writing this I was going to write a poem but it ended up being prose and sometimes the opposite happens...strange
Posted by Parul Gahlot at 6:18 PM

ah - i thought i would comment on anshuman's blog :P