Well the weekend is over and it was a really good one. I've been sitting with that cursor blinking at me for over an hour and I want to write but something makes me hesitate. I don't know what it is. I'm writing despite it. I want to write about the weekend and how happy it was but all I can think of is a song by Suzanne Vega in which she says,"and she closed herself up like a fan". I don't know why this particular line comes to mind. May be because I feel somewhat like that, like closing myself up like a fan. Here's a link to that song  The queen and the soldier by Suzanne Vega The song is a story really of a Queen who falls in love with a soldier and it ends in tragedy as all good love stories do.

Let me try to get out of this state of mind and go back to Friday. It was a lazy morning as usual with a cup of tea. We ordered biryani for lunch and then I began my cleaning spree which lasted all afternoon. I'm going to digress. A woman from Kzakhastan just walked in to the office and literally began talking in a loud voice about her magazine. Sam met her and she was the loudest most exuberant woman I've ever come across. It took half an hour to just figure out what she wanted and all the time I was trying not to burst into laughter. The worst thing was that she could hardly speak any English. I know that's not very sensitive of me to laugh but she was just so hilarious yelping about her wedding magazine.

Ok getting back to Friday. I bought some Rohu fish and looked up the recipe online for Macher jol bong style as my friend Ankita from NID days was coming over for dinner along with her sweet sister Pushpita. Ankita just moved to Dubai four months ago from the US. I cooked after a long time. I'm not a great cook but I'm not too bad either. Essentially I have little interest in cooking even though I have tried to develop a taste for baking which failed in misery. The only thing I managed to bake was the Betty Crocker's chocolate cake and I would end up making so much that it would be hard to finish it for the two of us. 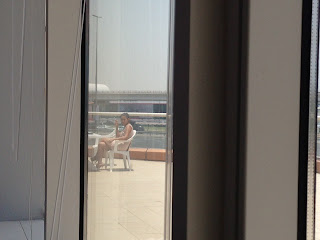 Oh I have to digress again! The loud lady came back again waving a pack of cigarettes. Vanessa told her she cannot smoke in the office so she went out to the terrace and had a smoke. She left the leftover Vogue cigarettes,"for your manager! For your manager!" That's Sam. My God such hilarious things happen sometimes on the quietest of days. That woman surely woke up the entire office clucking around in her high heels and ill fitting dress.

So Friday night Onki as I call her affectionately came over and we had a lovely evening. I got to play with the two little angels. They jumped on the bed and they jumped on the sofa and they played with Ninna. I was so very happy. Ninna sat next to Ankita the entire time and forgot all about us. I guess it was love at first sight for both of them. Pushpita loved the house and my painting on the wall. She described the house in an interesting way,"nothing matches nothing and that's the way it's supposed to be." Everyone who comes to our home always says that it has great energy. I love my home and yes I feel most content when I'm there with my loved ones.

I spent most of the Saturday sleeping on the couch and watching the India Pak match which wasn't really interesting because india won easily amidst many many rain showers and interruptions. I slept rather late and woke up half an hour late and had to rush through everything in the morning but made it to office just in time. Well that's that. Until the next post :)
Posted by Parul Gahlot at 1:01 PM